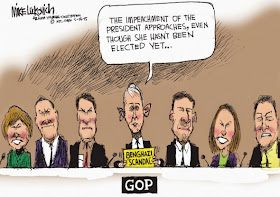 Latest wingnut conspiracy theory: the Boko Haram Nigerian kidnapping story is only propaganda the Obama administration is using to distract us all from BENGHAZI!! But you saw that coming from a mile away, didn't you? When they aren't arguing that Obama's a weak and ineffectual leader, they're often arguing that he's an all-powerful wizard who can manipulate the very fabric of reality, like Sauron. The rest of the time, he's Hitler.


Harry Reid backs a constitutional amendment to reverse the Citizens United ruling that trashed the very concept of campaign finance law and allowed limitless campaign funding from shadowy, secret donors. "It was as if I had jumped into the sewer," he said of running for reelection after the ruling came down. Are dems finally realizing that combating SCOTUS' string of pro-corruption rulings is a political winner? You sure hope so.


Marco Rubio pushes back against charges that he's a scientific illiterate by arguing that he knows stuff about the science of abortion -- then proceeds to prove the opposite.


Looks like there could be another Scott Walker document dump on the way. This Judge Randa guys seems pretty goofy and inconsistent. First he orders that all evidence in the case be destroyed and, when that bit of anti-justice is struck down by a higher court, says that nearly all of this evidence should be made public.


Steve Benen on today's most hilariously biased poll: "I hold a special place in my heart for Fox News polling, because unlike independent polls commission by major journalistic institutions, Fox News’ surveys tend to be... special."


Former Bush speech writer and occasional Unlikely Voice of Reason David Frum points out that the GOP advantage with older voters can't last forever. The problem is that people are living longer, which means Medicare and Social Security benefits are being stretched thinner, which means a whole bunch of older people will find themselves suddenly big gummint commies. Riding out with Paul Ryan under the "SLASH ENTITLEMENTS" plan isn't exactly helping the4m position themselves to make anything but enemies of these voters.


Finally, gun freaks -- i.e., the Second Amendment Heroes who worship the NRA and are so cowardly that the thought of being unarmed for a moment makes them crap themselves -- have a real bad habit of threatening, stalking, and generally abusing women. I guess the guy who feels the need to be protected by deadly force 24/7 feels that way because he's a complete asshole. He could stop being an asshole, so people would stop hating him, or he can carry a gun to protect himself from the victims of his assholery. And almost all choose the same option. Because they're worthless punks.