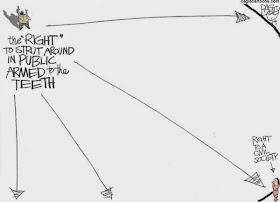 Score one for poetic justice. After gun nuts swarm a Chipotle to rub people's faces in their guns demonstrate their Second Amendment right to arm themselves against the threat of guacamole, the restaurant chain decides they've had enough of that and bans firearms from their stores. The firearms fetishists did the same thing at Starbucks -- showed up armed to troll people who dare to not get woodies when they think about guns -- and wound up making guns unwelcome there, too. Clearly nothing at all was learned from that experience. If they keep being such assholes about everything, they'll wind up getting guns banned everywhere themselves.


Sean Hannity brings some clown on to decry the "myth" of racism. You know, because Cliven Bundy and Donald Sterling and Robert Copeland are all figments of our imaginations. It's amazing what these people think they can get away with.


Related: a National Review writer denies there's a problem with rape on college campuses and that drunk college students are just making stuff up. Why would anyone write something so stupid and awful? Because Barack Obama said rape on college campuses is a problem and, for conservatives who think largely with their jerking knees, Pres. Obama is always wrong. If Obama said the sun comes up in the morning, there'd be a sunrise truther movement in a heartbeat.


The US Forest is preparing for "what is shaping up to be a catastrophic fire season." Because global warming is a massive conspiracy and all...


Dick Cheney seems to believe he lives in a separate reality from the rest of us.


Finally, Greg Sargent reports that Sherrod Brown has a plan to poach voters from the GOP over the summer. Republicans have requested hearings into Social Security Disability Insurance, which wingnut media has painted as wasteful and riddled with fraud -- which is, of course, total bullshit. The thing is, the GOP relies on older voters and those older voters wouldn't be happy to see disability cut. "So what if Dems campaigned on expanding Social Security, rather than allowing themselves to get drawn into another debate over how much to cut the program?" Sargent asks. Expanding the program would not only be the right thing to do, but it would appeal to a lot of seniors' inner big gummint commie.