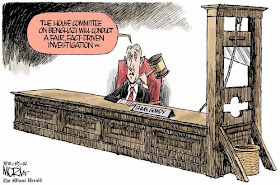 I have two observations regarding Nancy Pelosi's announcement of Democratic reps to sit on the BENGHAZI!!! committee. The first is the most obvious: that the Democratic boycott of the committee isn't going to happen. Second is that Alan Grayson isn't on the roster, which is sure to disappoint more than a few rank and file dems who were pushing for him to be included. The feeling I'm getting is that dems are going to take this thing seriously and with dignity, while feeding the Republican clown show all the rope they want.


Pope Francis says that Christians in particular have responsibility to combat climate change: "Creation is not a property, which we can rule over at will; or, even less, is the property of only a few: Creation is a gift, it is a wonderful gift that God has given us, so that we care for it and we use it for the benefit of all, always with great respect and gratitude."


This could turn out to be a bad idea: the US is sending 80 troops to Chad to help in the search and recovery of the Nigerian schoolgirls kidnapped by Boko Haram. Everyone involved needs to keep two words very much in the forefront of their minds: "mission creep."


The nuts aren't taking the fact that they got guns kicked out of Chipotle very well. It's their own damned fault, but these are conservatives we're talking about here -- personal responsibility is something everyone but them are expected to practice.


In "busting the myth that gun ownership prevents crime" news, North Carolina recently made it legal to bring guns to schools, provided those guns are locked in your car. Likewise, business owners can bar people from carrying firearms in their establishments, meaning that guns are locked in cars in these cases as well. So an enterprising group of thieves in Charlotte have taken to breaking into cars with pro-gun bumperstickers, on the rationale that they're much more likely to contain a free gun. "They're really advertising to criminals they may have a gun in their car so it may not be the best place to make those statements on the bumper of your car," says one gun shop owner. Oops.


Finally, Scott Walker has lost his slim lead over Mary Burke in the race for Wisconsin governor. A new poll from Marquette University finds that the race has gone from 48%-41% in Walker's favor to 46%-46%. Respondents told researchers that they prefer someone with business experience over someone with political experience -- Walker's a career politician, while Burke is a former exec with bicycle manufacturer Trek. But worse news for the incumbent is that the more voters know Burke, the less they like Walker. Finally, it may turn out that Wisconsin will buck the national trend and turn back toward blue this cycle. "Burke’s jump in the poll may also reflect a general shift in public opinion in favor of Democrats," The Capital Times reports. "Contrary to expectations that Democrats will suffer losses in November, as the president’s party typically does in midterm elections, 47 percent of respondents said they hope to see Congress controlled by Democrats compared to only 40 percent who want to see Republicans in control." 44% of respondents said they identify with Democrats, while only 35% said the same about Republicans.