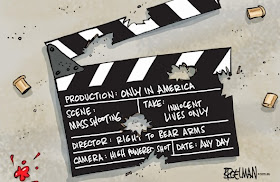 Conservatives continue to be absolutely clueless about the nature and purpose of the #YesAllWomen hashtag that's become a Twitter phenomenon. The thing is, it's not anything close to a mystery. If you go and actually read the tweets, it's completely obvious what's happening. But, conservatives being the pigheaded, closed minded zombies that they are, have decided it's all about hating men and that means they'll ignore even the plain truth that's staring them straight in the face. It's what they do with everything.


News that Wisconsin Gov. Scott Walker -- whose recall campaign is currently the target of a stalled corruption probe -- may be cutting a deal with prosecutors has his rightwing admirers in a panic. If he doesn't cut a deal, it seems likely that we'll see criminal charges -- during a reelection campaign. If he does, the wingnut base will drop him like a RiNO for throwing his co-conspirators under the bus. Unless the report that started this all turns out to be false, Scott Walker may be done.


Mitch McConnell's attempt to straddling the Obamacare fence and be for Kentucky's Obamacare exchange and against Obamcare itself has really gotten clownish. His attempt to spin his position has been so transparently dishonest and so disastrously clownish that it's actually turned into something of a scandal for him.


Politico performs a rare (for them) public service by setting the historical record straight and showing that the religious right's founding was rooted in racism, not some vague notion of "family values."


In case you needed reminding, Glenn Beck is scum.


A new poll shows that Karl Rove totally blew it by suggested that Hillary Clinton has brain damage. He can't even get a majority of Republicans to back him in the smear.


Finally, neocon moron Charles Krauthammer isn't happy with the president's plan to finally end the war in Afghanistan -- the longest war in American history. I would remind you that Krauthammer, along with other chickenhawk geniuses like William Kristol, was instrumental in starting the Iraq War. So there are foreign policy experts, there are foreign policy bonehead, their are slime molds, and then -- all the way at the bottom -- there is Charles Krauthammer. If he thinks it's a bad idea, that's all the proof you need that it's the smartest idea any one's ever had in the entire history of people having ideas about things.