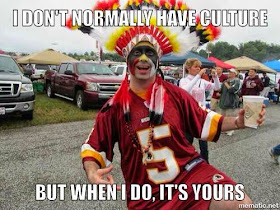 The Washington Redskins launched a Twitter campaign to defend their team name from  charges of racism. How did that go? What do you think? These things often go off the rails immediately. When you ask the internet to do something, the internet -- with all it's chaos, snark, and creativity -- is going to show up.


Speaking of things that are obviously possible PR disasters: The Republican Leadership Conference has invited noted homophobe, racist, and Duck Dynasty star Phil Robertson to speak at their confab. What could possibly go wrong?


There's a very good case to be made that firing Gen. Eric Shinseki won't do anything to fix problems at the VA and might even make things worse.


The reaction of the right to the death of Maya Angelou has been pure, undisguised hatred. It'd be a lot easier to believe conservatives weren't racist if they'd just stop themselves for a moment from being so damned racist.


Ever the brainless reactionary, Glenn Beck reacts to the sudden surge in awareness of the culture of abuse toward women by promising to launch a campaign of rape denial. What a worthless, useless man this guy is.


Finally, it looks like Pres. Obama is going to use his executive authority to cut carbon emissions from the nation's coal-fired power plants by 20%. Conservatives will go apeshit, but screw 'em.