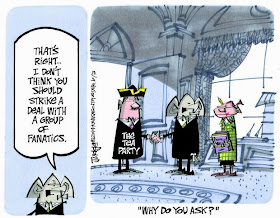 A former Bush official takes on the GOP freak out over the prisoner exchange that freed Sgt. Bowe Bergdahl from Taliban custody. Former adviser John Bellinger says GWB would've done the same thing. Of course, the problem here is that there's no shortage of Republicans who deny backing Bush, despite his having pretty much universal GOP support during his two terms. "I didn't support Bush" is the Republican equivalent of "I didn't live in Germany at the time." So they can pretty much write Bellinger off like they've written off Dubya.


Fred Kaplan has a good explainer on the Bergdahl story over at Slate. Definitely worth the time.


This whole thing Bergdahl has really gone full BENGHAZI!! quickly. Already, Republicans' wingnut base is blathering on about impeachment. I actually don't think the hysteria on the right is actually about Bergdahl or the prisoners exchanged for him. It's about all of their "scandals" constantly falling apart and being sick of not having good reason to hope for impeachment. They're demanding reality provide them with a reason to overturn the last two presidential elections. I doubt reality will comply.


And of course, conservatives were for liberating Bergdahl before they were against it.


Anyone have any evidence at all that voter ID has stopped an illegal voter? Anyone? Just one case. Just one arrest. Meanwhile, it's doing a good job of stopping legal voters. Anyone who thinks this is about fighting voter fraud is either dumber than a sack of hammers or so partisan that they've come to actually despise democracy. The enemies of democracy are the enemies of freedom; I don't care how many flags they use to wrap themselves up the pretense of "liberty."


Fox News accuses Hillary Clinton of politicizing BENGHAZI!! Just let that one sink in a bit.


The NRA gets dragged into its own version of the GOP Civil War, with (rhetorical) shots being fired between the crazy-assed gun organization and those who are even crazy-asseder. The whole thing is really kind of inevitable, given the amazingly irresponsible messaging from head gunhappy moron Wayne LaPierre. This has driven some Texan gun nuts so far around the bend that they feel they have to show up at family restaurants with assault rifles or FREEDOM IS DEAD! Needless to say, this is doing more to convince people that "gun rights advocates" are actually dangerous lunatics than anything else. The politics here are obviously terrible. So now the NRA is trying to get the gullible yokels to settle the fuck down after driving them into a panic with talk about tyranny and dictatorships and Hitler. They've lost control of their own messaging and I couldn't be happier. In the words of Nelson Muntz, "Ha ha!" Also, "Why you hittin' yourself? Why you hittin' yourself?"


Finally, Kevin Drum takes the VA scandal and turns it into a VA "scandal." The fact is that this has been going on for a very long time -- calling it an "Obama scandal" is a joke -- and on average, VA wait times are much, much better than the private sector. Again, Congress could fix this by opening more clinics where most of the veterans are, but they'd rather sit on their cushy behinds and point at Obama.