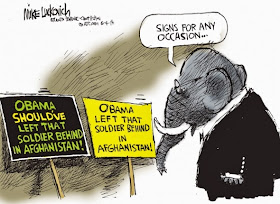 The latest example of Republicans being for freeing Bowe Bergdahl before they were against it: Rep. Duncan D. Hunter.


MSNBC's token asshole Joe Scarborough attacks Bowe Bergdahl's father for being a bad parent. This too much for Chuck Todd, who objected. Of course, this caused Scarborough to dig in and insist it's the rightest right thing any right person has ever gotten right. He then took to Twitter after the show to explain the subtle nuances of his rightness -- assumedly because he was hit by an avalanche of hate mail pretty much immediately. Morning Joe would be the stupidest morning "news" program on TV, if it weren't for Fox & Friends. But clearly the bar set by the morning foxbot circus really isn't much of an accomplishment. You'd get better political insight from The Weather Channel.


Hey look! There's finally a mass shooting outside the US. Expect the gun freaks to talk about it endlessly, as if one incident proves that everyone under the sun needs to put a gun to everyone else's head -- AKA, the cowardly "more guns, less gun violence" hypothesis favored by the NRA and other gun humpers. Because, you know, that's obviously the only way anyone will ever be safe.


Texas Republicans unveils a new party platform that endorses the thoroughly discredited "ex-gay therapy" snake oil. The problem with this stuff is that it's meant to turn gay people straight, but it seems to succeed only in turning gay people suicidal. I suppose for the bigots that make up the Lone Star GOP, a dead gay is just one less gay -- which is close enough.


Vice magazine cofounder Gavin McInnes tells Fox News that the only reason that liberals listen to Neil deGrasse Tyson is because he's black. "I hate this guy," McInnes said. "I remember hearing Chris Hardwick on a podcast talk about Neil deGrasse Tyson and he was just salivating. White liberal nerds love this guy so much, he could defecate on them like Martin Bashir’s fantasies and they would dance in the streets." Conservatives keep complaining that people call them racists, but the truth is that everything is about race to these kooks. According to them, if a black person has any success at all, it's because of Affirmative Action and white liberal guilt -- unless said black person is conservative. Doubt me? Two words: Maya Angelou.


In "hell freezes over" news: we got a brand new spanking Health and Human Services Secretary today. Sylvia Burwell sailed through confirmation to replace outgoing Secretary Kathleen Sebelius. Want proof that all the REPEAL OBAMACARE!! talk is just election year hot air? There it is.


Finally, a Nevada homeowner shoots a man in the chest for knocking on his door in the middle of the night, looking for a birthday party at the wrong address. Amazingly, there have been no arrests because this is 'murica, where you can shoot anyone you damned well please for any stupid-assed reason that pops into your empty fucking skull. Why call 911 when someone's banging on your door at 2 a.m.? Just start blasting like an idiot and a coward, because liberty.